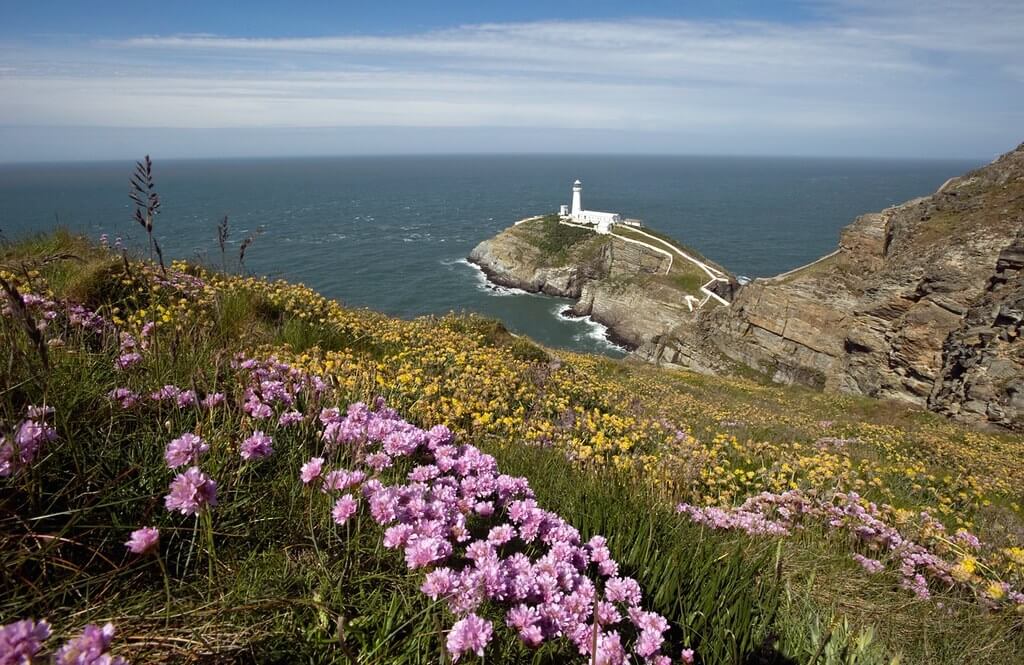 South Stack is one of Wales’ most visited and spectacular lighthouses. It is located about 2-3 miles west of Holyhead, on a tiny islet just off Holy Island on the North West tip of Anglesey.

South Stack has been a warning beacon for passing ships since it’s construction over 200 years ago, cautioning them of the deadly rocks below.

The lighthouse helps guide shipping in the busy channel into the Mersey and is a waymark for local seafarers, as well as for coastal traffic crossing the Irish Sea too and from the ports of Holyhead, Dublin and Dun Laoghaire. 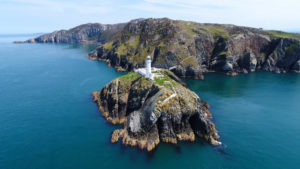 The South Stack Lighthouse was built by Trinity House, a charity dedicated to safeguarding shipping and seafarers. The Corporation of Trinity House has a long and illustrious history in the service of mariners. Nowadays it also provides education, as well as support and welfare, to the UK’s seafaring community.

They have a statutory duty, as a General Lighthouse Authority, “to deliver a reliable, efficient and cost-effective aids to navigational services for the benefit and safety of all mariners”. The safety of shipping and the wellbeing of seafarers have been the prime concerns of Trinity House since being incorporated (by Royal Charter) by Henry VIII on the 20th of May, 1514.

Nowadays the islet, separated from Holy Island by 30 metres of often, turbulent seas and treacherous rocks, is reachable via a footbridge…oh and the 400 steps you need to climb down to get to there! However, this was not always the case. The coastline in this area, from the breakwater in Holyhead, around to the south-western shore, is made up of large granite cliffs, with sheer drops of up to 60 metres, and fierce tide races below.

Although the lighthouse’s construction was completed in 1809, it was first envisaged in 1665, when a petition for a patent to build a lighthouse on the spot was presented to Charles II. The patent wasn’t immediately granted though, and not until the 9th of February, 1809, did the first light appears to mark this rocky little island out as the lighthouse’s setting. Not until 1828, eight years after the lighthouse was finished, was a bridge added!

Trinity House employee, Daniel Alexander, was the main surveyor and architect. Originally he had it fitted with Argand oil lamps and reflectors. Yet, in about 1840, a small railtrack was installed in order that a lantern, with an additional light, could be lowered down the cliff, to sea level, when fog had concealed the main beam above.

In his capacity as surveyor, Alexander built a number of lighthouses, including, the High Lighthouse at Harwich in 1818, and others at Farne and Lundy Islands. His first major work was the improvement of the medieval bridge at Rochester. He was also the principal architect of Dartmoor and Maidstone Prisons, two of the oldest goals still in use. In 1799 he carried out a detailed survey of Rochester Cathedral, and recommended a programme of repairs. Alexander was also a surveyor with the London Dock Company, between 1796 and 183, and was responsible for all the buildings there during that time. Other works include Mote House near Maidstone, built in the 1790s, repairs to Coley House near Reading, as well as extensions to Inigo Jones’ Queen’s House (then the Royal Naval Asylum) in Greenwich, London. 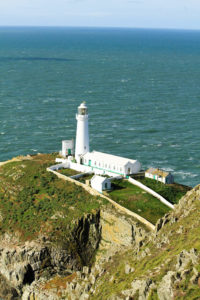 Let there be Light

In 1983 the footbridge, sadly, had to be closed to the public, due to safety reasons.  However, in 1998 a new aluminium bridge was built, and once again the island was opened to the public. This is the bridge we can all still cross today.

Until 1828, before the footbridge was added, the only means of crossing the deep-water channel to the island was via a wicker basket, suspended on a hempen cable! Yes, they had to brave the swirling seas below them in nothing more than a hamper-like container on a rope.

Now, if you’ve ever walked across the footbridge, you’ll know what a terrifying prospect that must have been – although I imagine those who did it were far braver than me.

In 1859, during the horrendous storm that wrecked the ‘Royal Charter’ off Moelfre (some say it should be classed as a hurricane), one of the keepers was fatally hit on the head by a falling rock as he came on duty. Many of the keepers lived here with their families.

I can only imagine what a panic the poor mother must have constantly been in, trying to keep tabs on the children! If you go on the ‘Lighthouse Tour’ you’ll hear more about the domestic side of things on the islet – so, as I don’t want to spoil things, I’ll leave it at that for now. 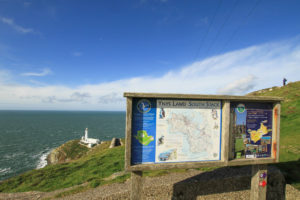 With its breathtaking views, and opportunities to see a plethora of seabirds, South Stack Lighthouse now welcomes thousands of visitors every year. Tickets can be purchased in the RSPB South Stack shop, next to the cafe, where there’s a large car park. The cost is £5.80. Guided tours of the lighthouse are also available at certain times.

The tour includes a visit to the engine room and exhibition area, before being able to climb up the spiral staircase to the top of the lighthouse. Tours of the South Stack Lighthouse are organised by the Isle of Anglesey County Council, under licence from the Corporation of Trinity House, with the RSPB selling tickets on the council’s behalf. Take note, the bridge is closed every Friday.

As weather conditions can be variable, sometimes restricting access to the island, it’s a good idea, in order to avoid disappointment, to telephone or check the website before you visit. NB Don’t forget to buy your tickets at the top BEFORE walking down the steps!

You’re advised to wear flat shoes, but not flipflops. Lighthouse tours can cater for groups of up to 20 only. Be aware that at busy times there may be a delay of up to an hour.

Also, there are no toilets on the island – and no dogs allowed either. Children are very welcome, they must be at least 1.1m in height. All visitors (including children) must be able to ascend and descend the stairs unaided.

Make a day of it

Other facilities in the immediate area include an RSPB visitor and information centre, including a cafe, picnic area, toilets, a viewing ‘tower’ with telescopes and binoculars etc, and guided walks. A full programme of educational, conservation and active pursuits are also available throughout the year – all organised by the RSPB. All profits go towards the cause.

The viewing part of the visitor’s centre is called Elin’s Tower. Elin’s Tower (Tŵr Elin) is a squat, castellated building located only a short walk from the parking area and cafe/shop. Built between 1820 and 1850 by the local, and well known Stanley family from Penrhos, it was originally used as a summer house.

Today it affords fabulous views of the surrounding cliffs and lighthouse. It’s open daily from 10 am to 5 pm, from Easter to September, with free entry. Right on the cliff-edge, it’s an amazing place to watch thousands of breeding seabirds. Here you can watch the gulls, choughs, fulmars, peregrine falcons, guillemots, puffins and razorbills (to name but a few) at your leisure, and can even view live action, via CCTV, of nesting birds on the cliffs.

Between May and June is the best time to visit, when thousands of romantically-minded feathered couples congregate to mate and nest here. There is disabled and pushchair access to Elin’s Tower. 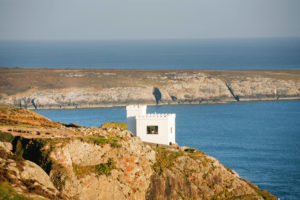 As stated before, there are over 400 stone steps down to the lighthouse island (not 365, as local legend would have it), and as you take each one, you can’t help being moved by the awe-inspiring scenery and geology. If you visit during the Spring and Summer months, you’ll also be able to enjoy the vast areas of headland, heathland and hilly interior that this part of the island has to offer, in all their glory.

They become a riot of colour, with coconut-scented yellow gorse, bright-purple heather, and other glorious wildflowers that will, quite literally, wow you! Look closely and you might even see a basking adder, rabbits and hares running free, or beguiling butterflies! Look out to sea you may catch a glimpse frolicking seals or the pods of porpoises and dolphins that often perform below.

Numerous footpaths lead into this bracken-covered, wonderland. Why not hike 700ft to the top of Holyhead Mountain (Mynydd Twr), which takes about 45 minutes. If you don’t have quite enough energy for this, a short stroll along a path that’s opposite the car park will take you to an ancient settlement of stone roundhouses.

The Anglesey Coastal Path passes South Stack, as does the Cybi Circular Walk. The latter has both long and short variants. The shorter walk is 4 miles long and takes about two hours to complete. Sites along the way, as well as those mentioned previously, include the North Stack Fog Signal station, and Holyhead’s Breakwater Park.

On Anglesey, take the A55 dual carriageway from Bangor to Holyhead and then follow signs to Holyhead Town Centre, from where the lighthouse and RSPB reserve are signposted. You can also get there from Trearddur Bay –  by following the coastal road around the bay towards Porth Dafarch and Porth-y-post, then head North/NW.

If you would like to stay near South Stack lighthouse we have holiday cottages in South Stack. We also have a selection of cottages nearby in Treaddur Bay, Rhoscolyn and Valley. 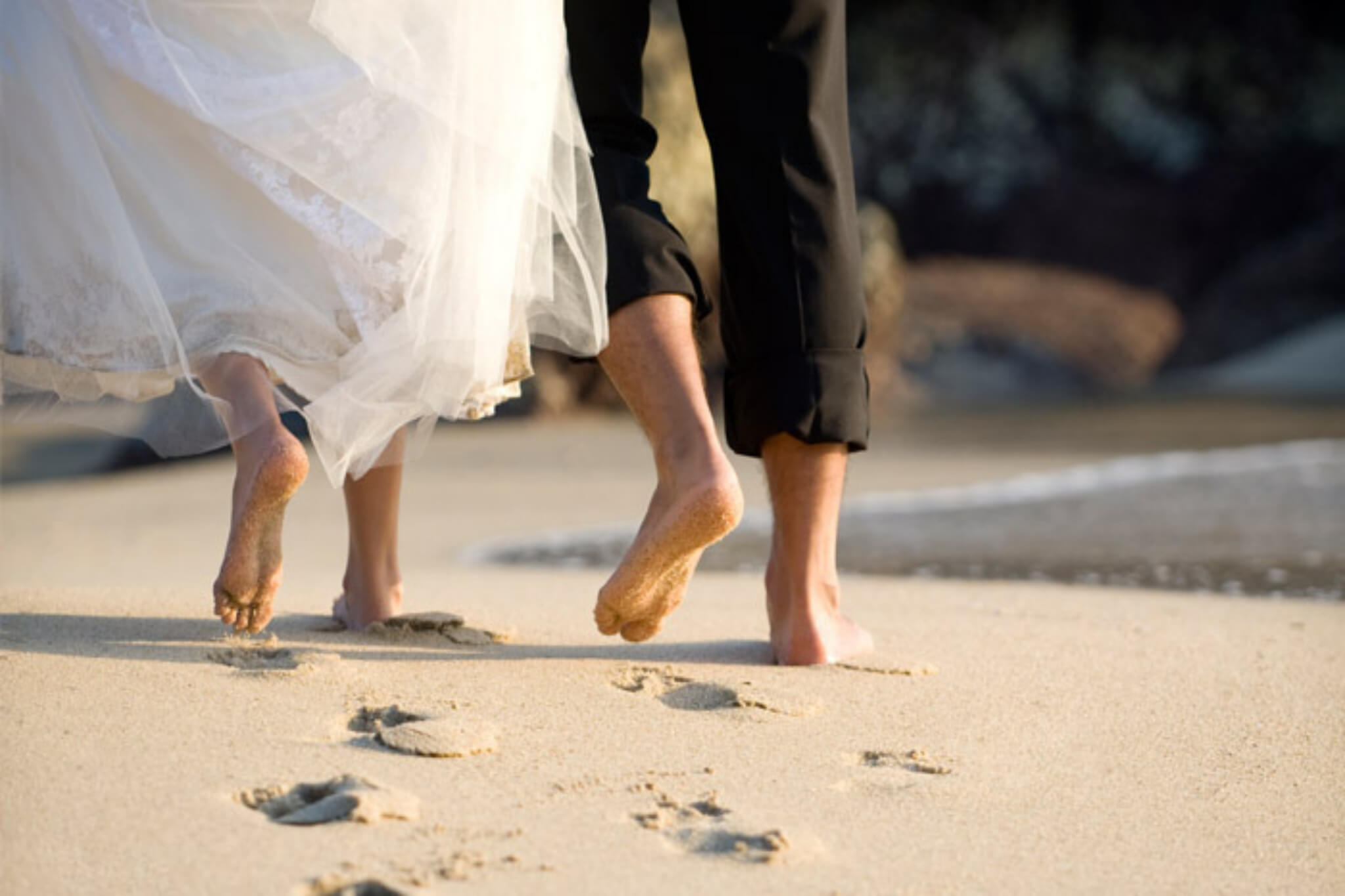 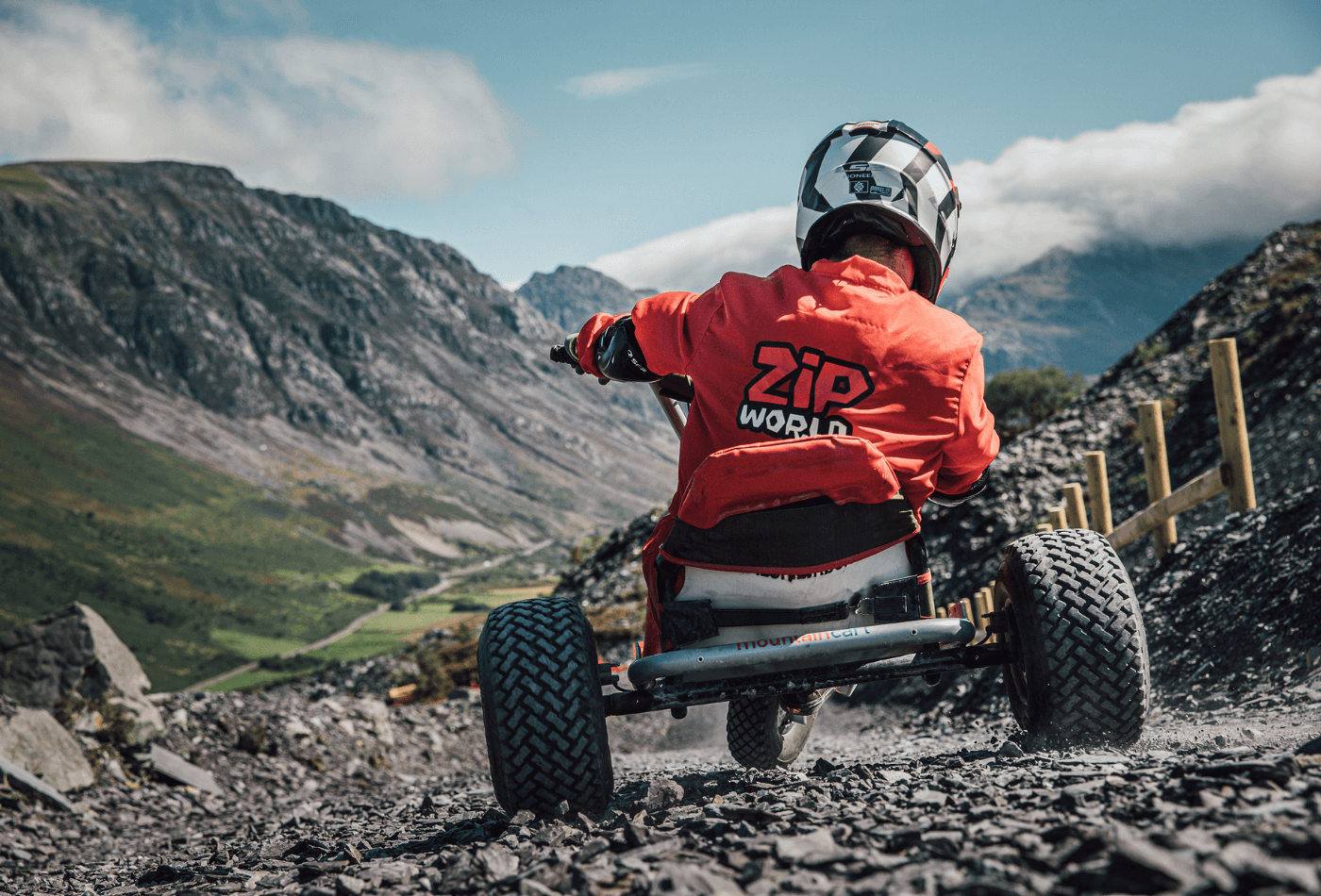 Home to three epic sites in North Wales and 15 iconic adventures, Zip World is a must for anyone... 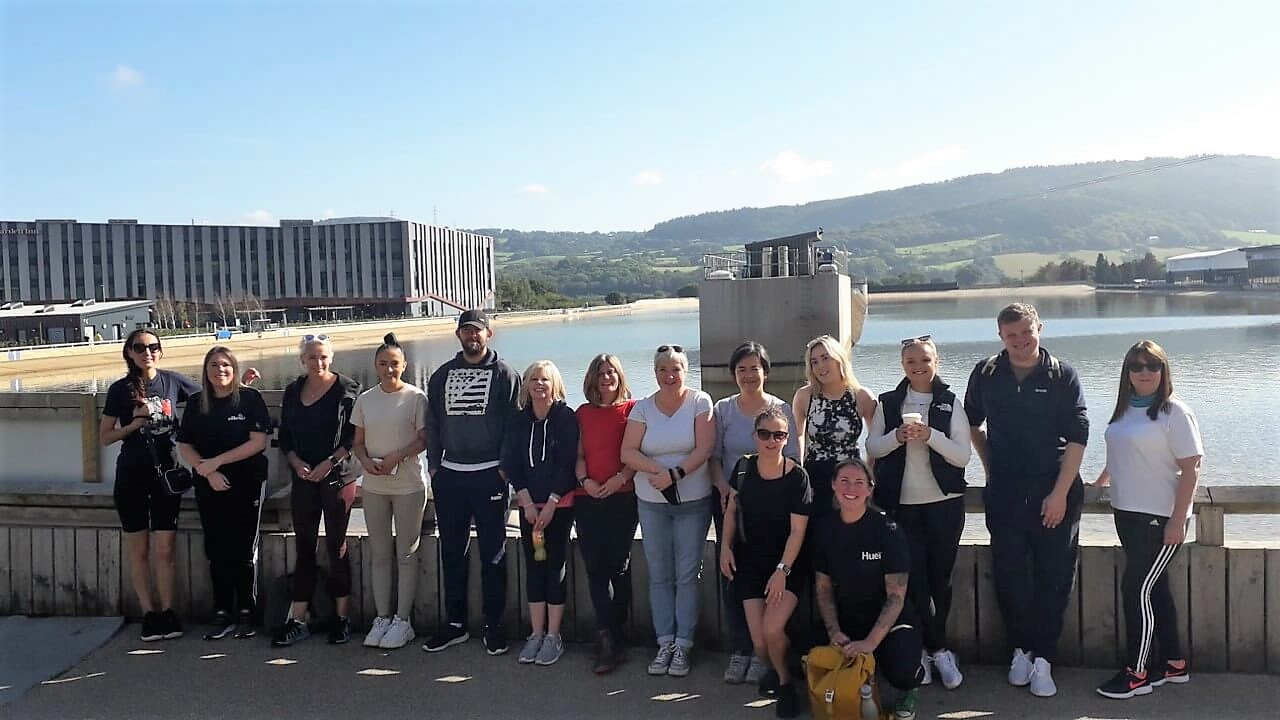 Our team day out at Adventure Parc Snowdonia

After a busy summer season and challenging COVID times, members of our team enjoyed a fabulous day out at...